Ultrasound-guided cannulation of the brachiocephalic vein in newborns: A novel approach with a supraclavicular view for tip navigation and tip location

Purpose: Central vascular catheters (CVCs) are frequently used in newborns in NICU. Ultrasound (US) guided supraclavicular venipuncture of the brachiocephalic vein (BCV) is usually performed with a 12 MHz linear probe and then a catheter tip location is verified with an 8 MHz micro-convex probe or intracavitary ECG (IC-ECG). We explored the feasibility of an US guided puncture using a 7 MHz sector probe, positioned on the clavicular sternal joint. We also explored the opportunity of performing it with a probe tilting tip navigation and tip location. Design: This is a monocentric retrospective observational study made in the neonatal intensive care unit L. Vanvitelli University Hospital of Naples, Italy. Patients: Forty newborns in NICU scheduled for an ultrasound guided CVC. Interventions: US guided brachiocephalic vein catheterization. We used A long axis in plane supraclavicular approach to the BCV for real time puncture, for tip navigation and tip location, using a 7 MHz sector transducer. We executed an ultrasound pre-scan of the Y-shape (right and left BCV, superior vena cava (SVC)) and of the right pulmonary artery (RPA), and then we performed a guided sterile puncture on middle third of supraclavicular fossa next to clavicular sternal joint with a 7 MHz. We used the same probe for tip navigation by this supraclavicular short axis of ascending aorta view. Tip location was confirmed with the ultrasound and IC-ECG. Results: In all infants the ultrasound tip navigation and tip location were successful and were confirmed by IC-ECG. No misplacement, arterial puncture or pneumothorax occurred. Conclusions: The supraclavicular view performed with a 7 MHz sector probe has proved to be completely safe and to be a method with 100% feasibility.
Categoria:
Tecniche e Metodi 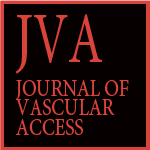